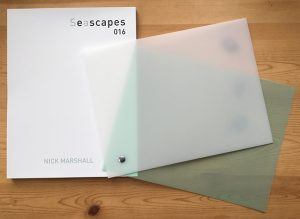 To purchase, please visit our online bookstore or subscribe to VSW Press.

For this play on a swatch book, Nick Marshall’s _e_scapes found inspiration in commercial paint manufacturer’s use of nature and time to assign names to their colors.  It takes the reader through a day that starts at Dawn’s Early Light C57-1 and eventually fades into a Peaceful Night 590F-7.

Read More
_e_scapes is full of subtle wit, allusions to illusions, and humorous commentary on our relationship with escape. Marshall’s work meditates on intangible meeting places: of the horizon, and on the tension between transcendence and authenticity versus fabricated experience. The artist says he is interested in the romantic perspectives we have of the sea, and where that illusion falls short—how we strip away its transcendent quality and engage with it in a fabricated, temporal way, through “vacations” or by painting the walls of a space with particular idyllically named hues.

This work has emerged from Marshall’s interest in vernacular photographs as objects, but also from a fascination that arose from the duties associated with his current position as manager of exhibitions and programming at George Eastman Museum. The artist spends his days planning and constructing ephemeral settings in support of photography exhibitions, choosing paint colors, and preparing walls for exhibitions. Through this work, Marshall gained an unlikely fascination with the mundane absurdity in the naming of paints. “They’re all given names, like “Crisp Morning Air,” which don’t necessarily describe a color,” he says. The stacks of paint swatch books in his office began to reveal a prevalence of colors with names that described air and water. “Both are very fluid, and ephemeral, and to try to pick a specific color to represent the sky in Utah . . . there’s just kind of a level of absurdity to it.”