For her residency, Priya Kambli envisions installations of objects and text in a variety of materials and media, exploring the concepts of nationality, bureaucracy, and the formation and erasure of identity. In 2011, Kambli gave up her Indian nationality to become an American citizen. Doing so meant having her Indian passport invalidated at the Indian consulate with a stamp stating “Passport cancelled as the holder has acquired Foreign Nationality.” This bureaucratic language invalidating her Indian nationality will be the departure point for creating a body of work, striving to understand the formation and erasure of identity that is an inevitable part of the migrant experience.

Priya Kambli received her BFA at the University of Louisiana in Lafayette and an MFA from the University of Houston. She is currently Professor of Art at Truman State University in Kirksville, Missouri. Kambli’s artwork has been well received, exhibited, published, collected and reviewed in the national/international photographic community. 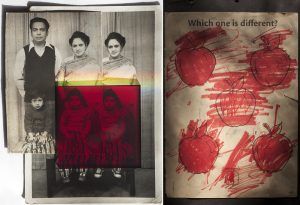