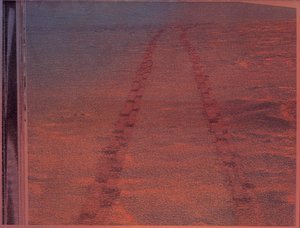 Sage Lewis’ book Mars Analogues was inspired in part by her experience exploring the desert in Qatar. She recalled this landscape, a year after inhabiting it, while viewing photographs from Mars made by NASA rovers. The book includes photographs the artist made while in Qatar, photographs she made of the book Postcards from Mars by Jim Bell, both sequenced with her photographs of abstract watercolor paintings made by the artists’ mother.

NASA/JPL/Cornell images taken by Mars Exploration Rovers between 2004-6 and published in the book Postcards from Mars by Jim Bell (Dutton/Penguin 2006) have served as the departure point for my multi-layered color laser toner prints. Other prints incorporate excerpts of watercolor paintings made by my mother Rose Loving in the 1980s and 1990s on Arches cold press paper. Sections of her paintings are used throughout the book. Black and white photographs were taken by me in Qatar in 2015. The geology specimens are photographs I made in 2016 using lantern slides from the collection of the Visual Studies Workshop in Rochester, NY. The glass slides were projected onto a backdrop of watercolor paintings and theater gels were used to create color effects in the room while I photographed the projection.

Earlier this year, I was browsing used books in Vermont when I came across a large coffee-table style book of landscape photographs that looked familiar to me. As I flipped through the pages showing vast expanses of rocky ground, details of geologic formations, and wave patterns in the soil, I had the distinct sense of having experienced this landscape first-hand.

The book was called Postcards from Mars and the images therein were taken on Mars by NASA’s rovers, Spirit and Opportunity. Gazing at these images, I felt almost nostalgic as I identified tire tracks imprinted on the bare land. I recognized outcroppings and rims of crater-like depressions where I had spent time photographing. A year earlier I had been living in Qatar and exploring the desert in a remote area in the west of the country called Zekreet.

There are numerous places on earth where the landscape can make you feel as though you are on another planet. NASA has used deserts in California and Mexico to simulate the experience of Mars and these places are referred to as Mars analogues.

Analogue has a different meaning when we think about how photographic images are produced. Images from NASA’s rovers, landers, orbiters, the Hubble Space Telescope, or the ESA’s Rosetta mission for example, are all beamed to earth as data, which is then translated by humans to make a picture. In earlier decades, image data from the moon was printed in segments and physically pieced together by scientists to compose a whole. Now image data sets are assembled like a mosaic and layered in “screen space” to create composite images, a kind of digital collage. False color helps to delineate the layers and create a sense of depth or identify minerals. In the case of the Mars rovers, segments within a single image were captured hours or even days apart, under different conditions of light and dust. The notion of a photograph as a record of a moment in time becomes complicated if we consider the difference between earth time and Martian time, and the time it takes for each set of data to reach earth.

This evidence of time becomes compressed—or maybe even erased—in the effort to make the whole image appear correct and relatively seamless. There is a desire to make sense of the disconnected parts. Countless aesthetic decisions and edits are made before these views reach a wider audience. It is essential to remember the presence of human touch in the process of constructing these translations from remote lenses, because the image is also an object with a layered history.

Jim Bell is the astronomer for the Mars rovers PanCam which took many of the images that are reproduced in Bell’s book Postcards from Mars. In orchestrating the rover’s images, the work his team has done is representative of how we might attempt to know a place that is completely foreign. That is, inch by inch, looking intently at the ground in front of us, and piecing it together across time and space.